This post is part of a social shopper marketing insight campaign with Pollinate Media Group® and Universal Pictures, but all my opinions are my own. #pmedia #BoxtrollsFamilyNite http://my-disclosur.es/OBsstV.

Have you seen The Boxtrolls yet? We went to see it in the theaters and the four of us loved it! It came out on DVD this past Tuesday, so we headed to Walmart to buy the Blu-ray and Pop Secret Homestyle Popcorn (we have a popcorn addition!). We frequently do themed movie nights/days as a family or with friends where we incorporate food/snack ideas, crafts, and activities based on the movie we plan to watch. It’s a fun way to make movie night a bit more fun for the kids and a great way to spend time together. We also enjoy doing them as a playdate with our friends. 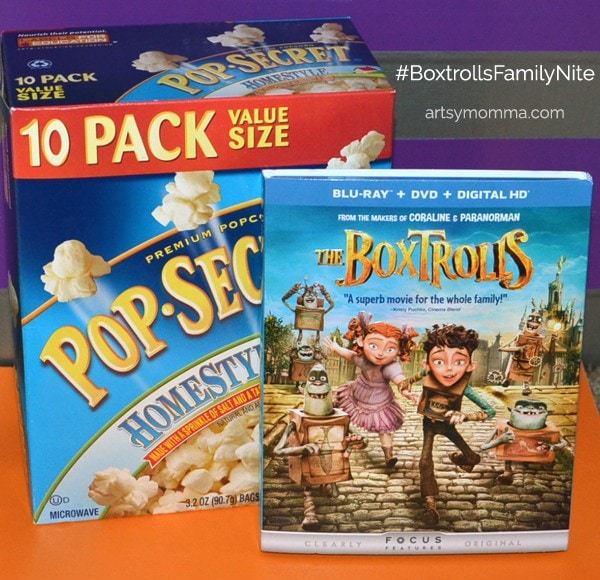 Eggs is a boy who was raised by the boxtrolls underground. They are seen as evil and sneak into Cheesebridge during the night to find things to take back underground. They have to be careful and watch out for Snatcher who made a deal with the mayor to exterminate all the boxtrolls in exchange for a white hat. The white hats are an elite group who sit around eating cheese all day and it’s all they care about. Snatcher succeeds in ‘snatching’ them as the group that’s left gets smaller and smaller. When fish gets taken, the one who took on the father role, Eggs is determined to find him. He enlists the help of Winnie, the mayor’s daughter.

There are quite a few good morals to talk about with kids. In the movie, cheese and the white hats are materialistic things that are sought after. They make Snatcher do evil things to get them and the mayor cares so much about them that he ends up making Winnie feel uncared for and not important. On the other hand, the boxtrolls make things from trash. At the end of the movie, the Mayor is given a choice between Winnie and the white hat. 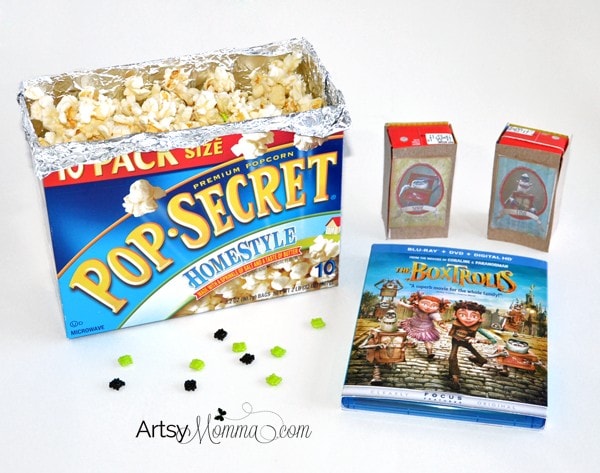 Fun Snack ideas to go with The Boxtrolls

I always try to incorporate food, snacks, and drinks based on the movie. Since the most obvious thing to incorporate is boxes, it only seemed logical to eat our popcorn in a box….hehehe. I emptied the bags  from the Pop Secret box since it seemed like a good size for holding the popcorn. Then, I placed aluminum foil on the inside. Now it’s ready for the popcorn! 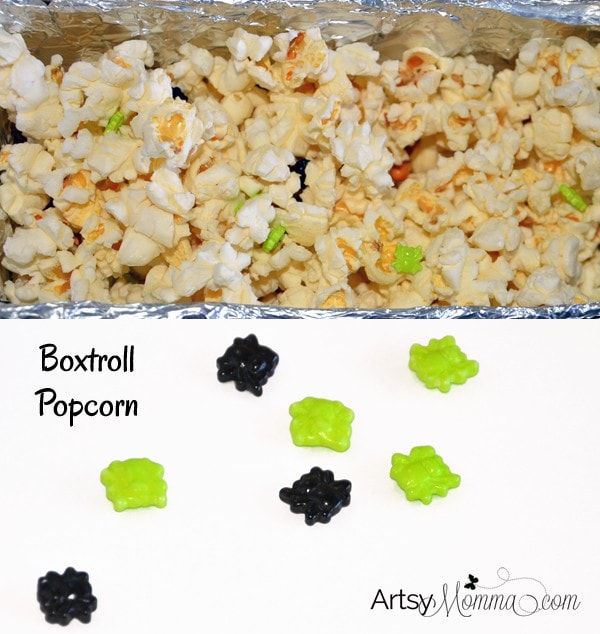 Since the boxtrolls eat bugs, I added some of our spider sprinkles we had purchased around Halloween. They became hidden in the popcorn making it even more fun for the kids to eat spiders! 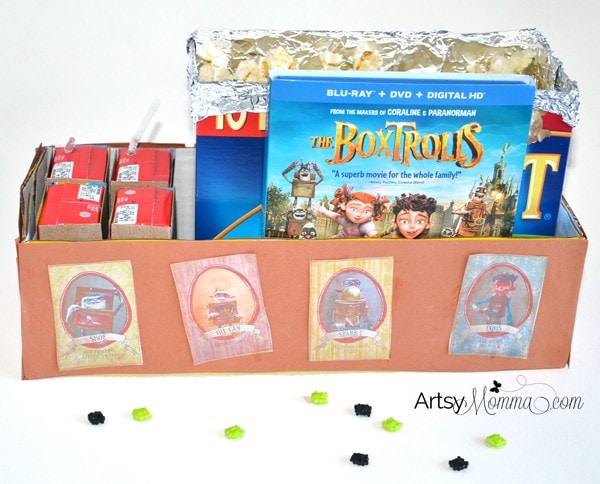 Little Sister and I used another empty box we happened to have on hand (The Boxtrolls use what they have around them)  and decorated it with these memory game printables I found from the movie website via The Boxtrolls Facebook page. This was used as our food tray to hold the movie, popcorn, and juice boxes.

The adults in the movie eat cheese – the most elite (white hat wearers) and Snatcher and his friends who try to be sophisticated like them even though he has a severe allergy to it. We had a cracker and cheese tray out to also snack on during the movie along with our popcorn. Another cheesy idea would be to make different flavored cheese popcorn for everyone to taste and talk about.

These are easy to make! I grabbed 4 of our juice boxes and glued on the cardboard from a cereal box. Trace the juicebox on top of the cardboard to get the sizing right. 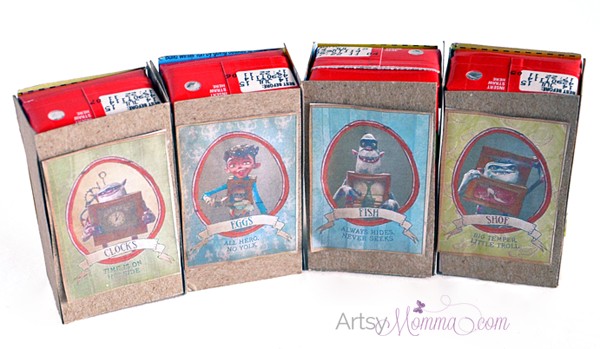 For the decoration, I printed the memory game from the website and glued a character card on each juicebox. If making more, stack them on top of each other like the Boxtrolls do when they go to sleep.

When the movie was over, they made a fun bowling game. If using 6+, stack them instead of doing the typical set up.

Using the same cereal box, I cut small rectangles and squares for the kids to make a craft inspired by the movie. The cut up cereal boxes represent the boxes they wear in the movie. They could make however many they liked and decorate them in their own creative way. The labels were printed from an activity book found on the movie website. Little Sister also made a dog! 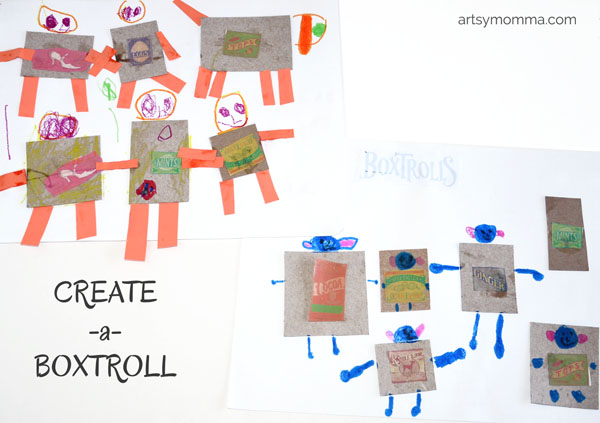 Since they are always hiding from the exterminators throughout the movie, we planned to make Boxtroll stuffed animals to hide and find. We made a Trubshaw baby ‘boxtroll’ instead since one of my daughter’s baby dolls fit perfectly in a k-cup box. All you have to do is find a small enough box to fit the stuffed animals or dolls, then make a hole on the top, bottom, and for the arms. Want to know what a Trubshaw baby is? You’ll have to watch the movie (wink)! 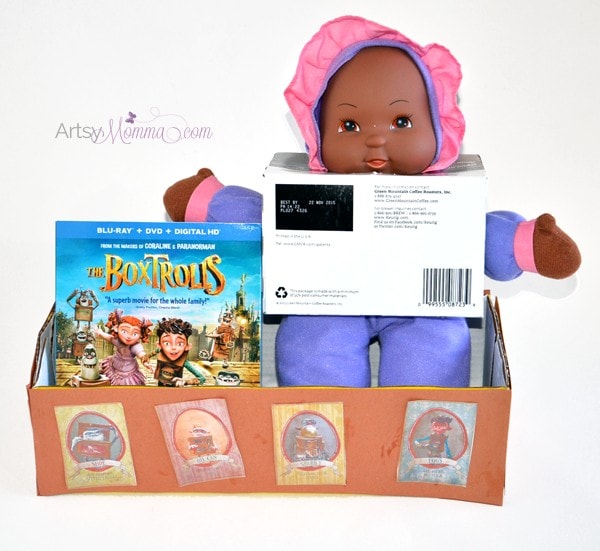 The kids took turns hiding it and being the catcher. They never tire of hide-and-seek and this one had them giggling. 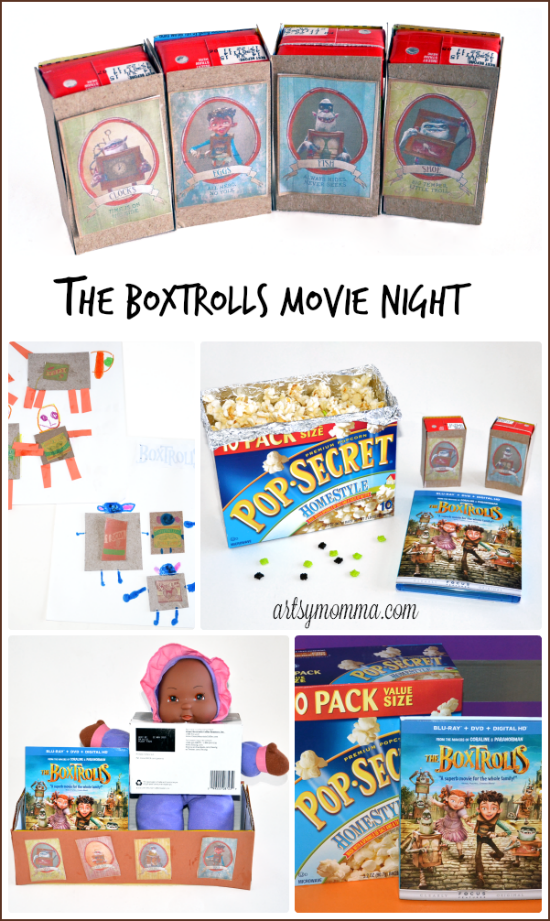 You can purchase The Boxtrolls DVD and Pop Secret 10ct Home-Style Popcorn at Walmart while supplies last.

Join us for more creative fun!